In the South Carolina Lowcountry (impress the locals by spelling “Lowcountry” as all one word. For some reason, “Highcountry” like around Boone, NC, doesn’t seem to work.)

I was never much of a jock in high school — think Leonard Hofstadter or maybe even Howard Wolowitz — so after graduation, I promised myself that if I ever reached retirement, I’d make up for lost time. 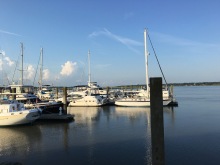 The start line is the bridge way off in the distance, in the middle of the picture (click for a larger image).

And here I am.  On the beautiful Beaufort River, actually a tidal estuary, that runs past the historic Lowcountry town of Beaufort, SC (you can also impress the locals by pronouncing it “Bee-you-fort,” not “Bow-fort” — that would be the quite similar town in North Carolina.)

To be more precise, in the Beaufort River, competing in the 10th Annual Beaufort River Swim, a 3.2 mi test of courage, commitment, and endurance.  I’m happy to report that I washed ashore at somewhere around the 1 hr 12 minute point.

I’m on the right. The guy on the left, George Moreno, is an old friend, who also won the race today.

I’m also happy to report that neither Mary Lee nor any of her friends and relatives put in an appearance.  I did follow the advice of a former SEAL friend, who suggested staying as deep into the middle of the pack as possible.

Beaufort really is a wonderful little town — think live oaks and lots of Spanish Moss. The exterior scenes of the house in The Big Chill were filmed here. Pat Conroy is buried here, as is his dad, Donald, the Great Santini. Plan a visit to mysterious and romantic Parris Island, which has a great museum, open to the public. If you’re coming down the East Coast, program in a day or two. I can personally recommend the Beaufort Inn.

To all my nerd friends, here is my message:  The wait is over, your time is now, you can do it.