As Frans Osinga pointed out in his 2006 examination of John Boyd’s philosophy of conflict, Science, strategy and war: The strategic theory of John Boyd, the OODA loop is the best known but probably most misunderstood aspect of Boyd’s body of work. Even today, it’s very common to see people describe the OODA loop as a loop. However, when Boyd finally got around to producing a “sketch” of the “loop” (his terms), it was, as I’m sure practically all readers of this blog know, something entirely different.

Why? The reason is that the OODA “loop” is an answer to a specific problem. It is not, for example a model of decision making — in fact, it simply requires you to make implicit and explicit decisions and link them to actions, all the while experimenting and learning.

On November 30, I gave a lecture on this subject to the Swedish Defense University in Stockholm. My host, Johan Ivari, arranged for it to be recorded and made available on the University’s web site. They broke it into two parts:

I had a lot of fun with this, and the students asked some great questions. I hope you enjoy it!

By the way, check out some of the other interesting videos on their site.

You can find the complete set of videos here: https://www.youtube.com/@CatalyzingtheFuture

Kanban University has posted the video of my keynote, The Lost Arts of Leadership, and How to Get Them Back, from the Kanban Global Summit in San Diego in August.

A couple of points:

There were a lot of interesting presentations. You can view them all on their Conference Archive and their YouTube channel. And don’t forget the helpful and entertaining set of annotations!

A subject I know virtually nothing about, apart from the Wikipedia article and a couple of Taleb’s YouTube videos.

That being admitted, here’s the definition from Wikipedia:

Antifragility is a property of systems in which they increase in capability to thrive as a result of stressors, shocks, volatility, noise, mistakes, faults, attacks, or failures.

Certainly sounds like a generalization of “operating inside the OODA loop,” which applies to conflict between sentient organisms and organizations.

I’ll be giving a closing keynote on operating inside the OODA loop at 11:25 ET on November 16 at the Agility, Resilience, and Antifragility 2022 Virtual Conference. It’s free and open to the public, so listen in.

[11/11/2022 version updates link to annotations] There’s a whole category of leadership practices that are rarely taught nowadays. I’m thinking witchcraft, conjuring, necromancy, divination and the like. People have been practicing these arts for tens of thousands of years — they show up on cave walls and the Bible attests to their power — but you’ll search long and hard to find MBA programs that include them.

So in my keynote at the recently held Kanban Global Summit in San Diego, I set out to remedy this sad state of affairs.

You can download the PDF (12.3 MB) of my presentation, and I’ve also included a helpful set of notes and annotations. WordPress’s Terms of Service appear to prevent me from including the actual spells, hexes, and curses themselves — a liability thing, you know. This is unfortunate, because we have all had occasions when the ability to transform into a werewolf and rip out somebody’s heart would have proven extremely useful*. But I think you’ll find enough to give your leadership that extra edge you need to be successful in these trying times.

Many thanks to David J. Anderson, founder, honcho, and chief sensei at Kanban University, for inviting me back. The University’s Kanban Maturity Model provides a tested framework for incorporating the OODA loop (the one Boyd intended) into practically any type of organization.

Also, my extreme gratitude to the staff of Kanban University for putting up with all my questions, objections, and negotiations over the past three years — the Summit was originally scheduled for 2020.

And, finally, our host facility, the Rancho Bernado Inn, might be a great place for that mid-winter, or, if you’re from my part of the world, mid-summer getaway.

*If you go around ripping out peoples’ hearts without first transforming into a werewolf, that’s not magic. You may have anger management issues.

I’m giving a keynote at the Kanban Global Summit on August 23 in San Diego. Here’s a preview:

Shepherd.com has just published my recommendations for your light summer reading.  The concept is to explain why people should read one of your books, and then to recommend five others, all around a common theme.  I took my inspiration from Boyd, whose basic method was to look for common themes — “invariants” —  across a wide variety of domains and then use these as the building blocks for his syntheses.

Here’s an example from his 1987 briefing, Strategic Game of ? and ? 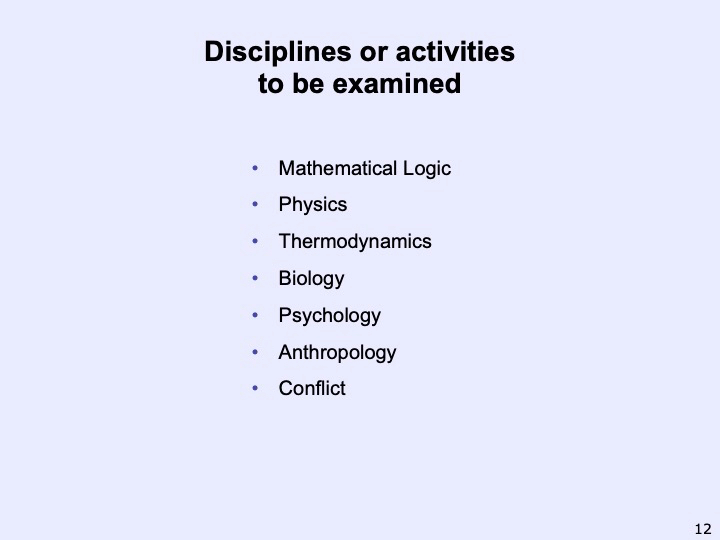 Typical Boyd to begin his presentation on strategy with stuff from mathematical logic and physics. In that spirit, I recommend works from:

And Robert Coram’s Boyd: The Fighter Pilot Who Changed the Art of War.

Just seemed like what every person ought to know. The site limits authors to five books, so I tried to pick subjects that you might have overlooked.

Go check it out: https://shepherd.com/best-books/for-upsetting-your-orientation

That would be the very first.

One of the most common ways to block change is to challenge, “OK, specifically, what do we do Monday morning?” You really can’t answer with “Oh, read over Patterns of Conflict a dozen times, and then we’ll hold a roundtable on Sun Tzu.” It just doesn’t work. Nor does “Monday morning, right after the meeting on the new promotion criteria, we’ll start working on einheit.*”

And be suspicious of the common suggestion to “create a sense of urgency.” If you really are in a situation where survival on your own terms is at risk, then ensuring a shared perception of reality will be all the motivation you need.

This post offers ideas for creating a solution to the problem of declining competitive power due to cultural reasons. In other words, you have lots of energetic, educated, and experienced people, but compelling products and services aren’t rolling out the door. Corporate entropy: Plenty of energy, but it isn’t accomplishing useful work. In that regard, here’s a short example on Blue Origin vs. Space X: https://arstechnica.com/science/2021/10/revealed-the-secret-notes-of-blue-origin-leaders-trying-to-catch-spacex/

But first, a disclosure. I’ve known David Anderson for some 11 years and have spoken at several of his events. I’ve even been mentioned in one of his books. The reason for bringing up his methodology anyway is that it’s firmly grounded in Boyd’s philosophy and has evolved into a specific answer to “What do we do Monday morning?”

With that in mind, download the “KANBAN Maturity Model: Barriers to Adoption.” Don’t worry about what the words mean at this stage, just read over some of the barriers. Here are a few right at the very first:

LACK OF TRUST OR INSUFFICIENT EMPATHY

LACK OF CUSTOMER FOCUS OR SERVICE-ORIENTATION

There are some real gems as we move through the various maturity levels:

You get the idea. It’s important to keep in mind that these are symptoms. What you need, and what the KMM methodology addresses, are the underlying causes.

I’m certainly not going to claim that this is the only methodology that will get at fundamental causes. But even if you never take the first step up the maturity levels, you might find several useful parts for your snowmobiles in this chart.

Should you be interested in more information, you can visit them at: https://djaa.com. Incidentally, I’ll be doing a keynote at the Kanban Global Summit in San Diego, March 14 – 16, 2022. Not to give away any spoilers, but I shall resurrect “The Lost Arts of Leadership.”

*Observant readers may have noticed the lack of initial caps, or italics, or the odd umlaut in the elements of Boyd’s organizational climate. Got tired of all this, so I’ve declared them to be English words, where we don’t do such things. Consider them recent loan words from German, on a par with autobahn, blitzkrieg, kindergarten, schadenfreude (my personal favorite), and umlaut.

The Norwegian Defense University has just published a new version of “Boyd’s OODA Loop” in their journal, Necesse, edited by Royal Norwegian Naval Academy. I had thought that the previous version was about as close to perfection as can be found on this Earth, but alas Necesse is a peer-reviewed journal, and “Reviewer No. 2” ripped it to shreds. After I calmed down, it was clear that Number 2 was right. So the edition published in the journal is vastly improved over the last version.

As Boyd suggested in his final briefing, The Essence of Winning and Losing (all of Boyd’s works are available for free download on our Articles page), the OODA “loop” is simply a schematic representing three processes and the interplay among them:

In fact, he even called his drawing of the OODA “loop” a “sketch,” strongly indicating that there might be better ways to represent these processes, and over time, people have suggested several.

The folks at Necesse have done a magnificent job of making this rather long and complex paper readable. Although I am sure there are many people involved whom I do not know — you have my sincere gratitude — I would like especially to thank two officers of the Royal Norwegian Navy whom I know quite well and am proud to call colleagues, Commanders Roar Espevik, Main Editor of Necesse, and Tommy Krabberød, who approached me with the idea of a new version of the paper and encouraged me to press on with a major revision as a result of certain peer review comments.

You can download the paper from the Articles page. The current edition of Necesse, which contains the paper, is available at https://fhs.brage.unit.no/fhs-xmlui/handle/11250/2647802, and past issues can be found at https://fhs.brage.unit.no/fhs-xmlui/handle/11250/2559117. It’s an interesting journal. There are quite a few articles in English, and, through the miracle of Google Translate, you should have no trouble with the others. The origin of the name, incidentally, is found on the last page of the journal.

All forms of mission-oriented leadership, from maneuver warfare to the Toyota Production System, share a common foundation: Fire up the creativity and initiative of all members of the organization and harmonize their efforts to accomplish the objectives of the organization. Such an orientation allows them to create and exploit fleeting opportunities before their opponents can understand what is going on.

As Don Vandergriff quotes one of the principal architects of the German blitzkrieg:

The principle thing now is to increase the responsibilities of the individual man, particularly his independence of action, and thereby to increase the efficiency of the entire army. . . .The limitations imposed by exterior circumstances cause us to give the mind more freedom of activity, with the profitable result of increasing the ability of the individual.

This approach is often called Auftragstaktik, and it is hard to find any military organization that doesn’t claim to be using it.