In my last post, I suggested a few things to read once you’ve become satiated with Boyd himself (don’t worry, it happens). A reader kindly recommended Steven Pressfield’s study of the Six Day War, told from the viewpoints of Israeli participants ranging from 19-year-old troopers to Minister of Defense Moshe Dayan. I highly recommend it as a source book for illustrating the major points of Boyd’s work.

I will admit to being a huge fan of Pressfield, beginning with The Gates of Fire. I suspect that regardless of your position on the various players in the Levant, past or present, you’ll find The Lion’s Gate to be a page-turner.

One caution before you press the “Comment” button. I’m not interested in, nor will I post, comments that include your personal opinions on which side was morally justified in its actions in the Six Day War, or who is right or wrong in the various conflicts in the Middle East today. Just not relevant to the topic at hand.

What follows is a sampling of selections from the book that I have arbitrarily placed into categories. Note that many of them could fit into more than one.

The prime minister’s intent must be “to preserve the nation by destroying the forces arrayed against it.” p. 12

If you want to know what makes the IDF the force it is, here is the answer: A sergeant stops the brigade commander leading all the tanks of an armored battalion and thinks nothing of it. p. 219

Only in Israel can a twenty-two-year-old lieutenant address the commander of the air force not just by his first name but by his nickname. p. 17

My officers, my men, I have known them my whole life. I will call them friends till I die. p. 284

Improvisation is the payoff of scrupulous preparation and drill. p. 226

Quoting Gen. Ariel Sharon: Of course, the Israeli soldier will make up his own mind and do whatever he wants. This is as it should be. p. 62

Quoting Dayan: “I would not be assigning you this task if I did not have complete confidence that you can do a better job than I can.” p. 98

But Dayan believed that to punish an officer for acting with initiative, even such excessive initiative as Sharon had taken, would work irretrievable harm to the aggressive spirit of the Israeli Army. p. 96 He could forgive anything from a fighter who seized the initiative in the face of danger. p. 98

One thing must take place exactly as in the plans: the principle upon which these plans were made. Every man will attack. Every unit will push forward as fast as it can. Pay no attention to your flanks. Give no thought to resupply. If you lost nine tanks out of ten, keep advancing with the tenth. Stop for nothing. p. 179

Keep moving toward El Arish. Get there at any cost. I will meet you there and shake your hand. p. 181

Your struggle is not with your enemy’s men or his positions but with his fighting spirit. That is why we break through … to sow terror and confusion, to disrupt his rehearsed schemes, to compel him to decide and act amid fear and chaos. pp. 281 – 282  [compare to Patterns of Conflict, chart 132.]

Go over [another flight of Israeli fighters headed for Egypt]? We can’t. Enemy radar will pick us up. Pass under. There’s no other way. P. 145

He [Sharon] will regard as good fortune the fact that enemy doctrine has concentrated so many troops and so much firepower in one position. … He will ask himself, “How can I attack this locality in a way that its defenders will least expect and to which they will be least capable of responding in the confusion of the moment?” p. 229 [also compare Patterns 132]

Motta Gur calls his battalion commanders together and tells us that the brigade will no longer be operating as a brigade. “You are free to do what you like with your battalions.” p. 348

Equanimity: We practice to elevate our threshold of emotional detachment, to inculcate that state of preparedness and equilibrium that enables a pilot to function effectively under conditions of peril, urgency, and confusion. p. 137 [Note: also a good description of Fingerspitzengefühl.]

The Israeli concept of armored warfare is blitzkrieg. p. 177

Common implicit orientation: Complete the mission. Perform every action to perfection. Follow through at any cost. Be “ruthlessly candid” in debriefings. p. 15

The only computer is between my ears, and it is crunching numbers furiously. p. 145

Inside their OODA Loops

The IDF and the IAF have been built upon the principles of speed, aggression, and audacity. p. 28

Quoting Sharon: The reason we will thrash the Egyptians is because they can’t do the same. They can’t improvise. p. 62

Sharon’s signature elements were misdirection and ruse. Every Sharon plan had a twist of some kind that made it special. He was obsessive in integrating variety and innovation into planning his operations. Keep surprising the enemy with new tactics every time. p 72 [CR note: Compare Stonewall Jackson: Mystify, mislead, surprise.]

We’ve gotten here so fast, the Egyptians can’t believe we’re not their own men. p. 216

The intent of a tachboulah is to compel the enemy to respond, in the moment, under conditions of chaos, in a way he is not prepared for. p. 231

Kahlani is here with his tanks. So is Ehud Elad, commander of Tank Battalion 79. [Colonel Shmuel] Gorodish [Commander, 7th Armored Brigade] grabs his binoculars and moves forward to assess the situation. p. 210 [could also be under “OODA / Orientation” and “inside their OODA loops.”]

You have to go there. You must find the officer on-site. when he sees you, he will act. If he cannot, you must replace him. Right then. p. 281

Observation on Sharon by one of his subordinate commanders: He realized, as did Ben-Gurion and Dayan, that the Arabs had as legitimate a claim to this land as we did, and they possessed pride and courage and anger. p. 74

Let us in this hour of victory show the respect to our enemies’ faith that they have not shown to ours. p. 386

But the principles that informed Dayan’s tactical doctrine came from the moderns –primarily from the Russians, the British and the Americans, and, with an irony of which he was not incognizant, the Germans. p. 99 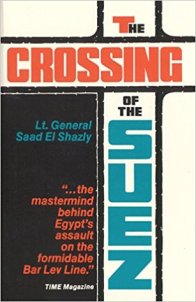 The purpose of Pressfield’s book is not to give an unbiased account of the 1967 war. There are already many studies of that war. Rather, as he says in the introduction, it is to put us into the minds of a small number of individuals who managed to pull off a remarkable military achievement. For this reason, and probably for any number of logistical realities, Pressfield chose not to extend the book to the Arab side.

I don’t know any any similar publication that covers Arab soldiers and officers (If you do, please so indicate in the comments). The closest I can come are two books from the 1973 war:

El-Shazli (as it’s transliterated in the book from الشاذلي), incidentally, commanded a force of 9,000 plus men that was one of the few Egyptian units to show initiative in the face of the Israeli advance.  In the 1973 war he was Chief of Staff of the Egyptian armed forces and is considered one of the chief architects of the crossing.

*All of Boyd’s stuff is available for free download from the Articles tab at the top of the page.

**In the 1980s, Boyd came up with an organizational climate that in his opinion was a major factor in the success of both blitzkrieg and guerrilla warfare. Its components are are: