Proponents of speed, such as “going through OODA loops faster,” can site some evidence from Boyd. Perhaps the chart that makes the strongest case is this one, from Strategic Game of ? and ? which Boyd began briefing in 1987: 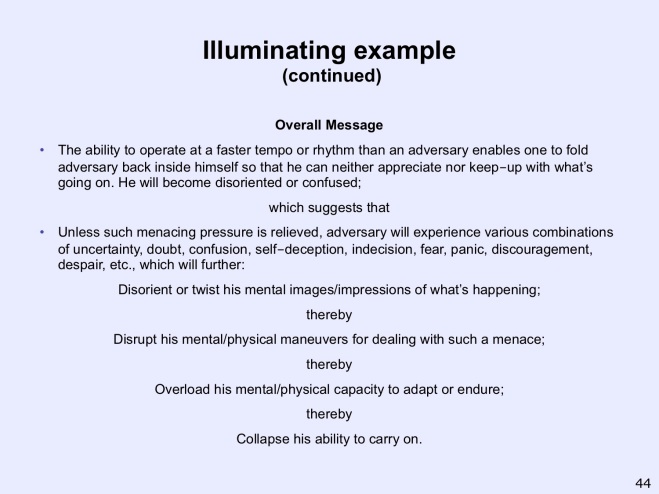 Seems pretty clear: If you want to discombobulate your opponents, then just “operate at a faster tempo or rhythm.”

There are a couple of problems with this approach, though. First is that Boyd doesn’t say “Operate …”  He wrote “The ability to operate …”  At the risk of undue scholasticism, this is big deal. Boyd, like a poet, agonized over every word in these briefings. It wasn’t unusual for the phone to ring and it would be John, wanting to try out several new phrasings for some line you might dimly recall.

In other words, if he meant “Operating at a faster tempo or rhythm than an adversary enables …” that’s what he would have written. So, what’s the difference between “operating” and “the ability to operate”? How can an ability to do something, as contrasted with actually doing it, produce these effects?

Another point to ponder is what, exactly, does it mean to “operate at a faster tempo or rhythm” than an adversary?