Fabius points out the power of retaining the moral high ground, “Feminists’ strategy brought many wins. They’ve abandoned it.” Technically, it should be “Feminists’ grand strategy …” but why quibble?  Here’s a take from Patterns of Conflict on what grand strategy is supposed to accomplish: 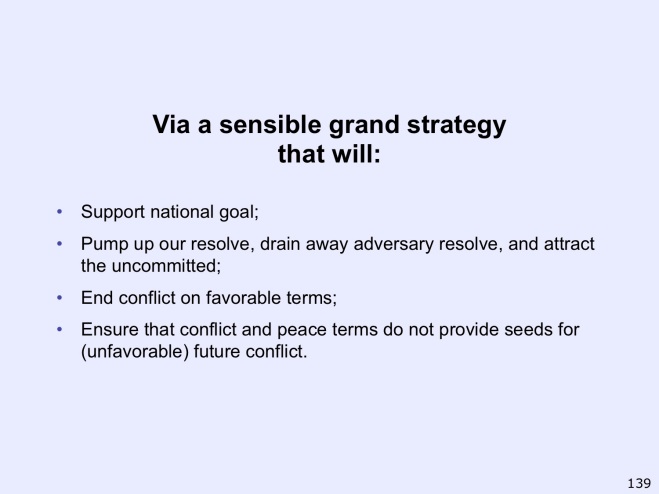 If you don’t care about influencing what Boyd called “the uncommitted,” including potential opponents and potential allies, as well as the less fanatical among your own team, or you’re not worried about what happens after the smoke settles, then you can dispense with grand strategy.

However, one never knows what the future will bring, so it’s always wise to keep your grand strategy in play as long as possible.  For example, during the South African Border War (1966 – 1989), the South African government gave its military a well-defined mission:

… to create the necessary conditions for the politicians to negotiate a political settlement from a position of power. The SADF (South African Defense Force) counter-insurgency approach therefore focused on denying SWAPO the opportunity for a military build-up in SWA/Namibia and Angola and its ability to operate effectively. This it succeeded in achieving. De Vries, Burger, and Steenkamp, Mobile Warfare for Africa, p. 198.

Notice the focus on military objectives. No nation building, occupation of enemy territory, or winning hearts and minds. This last was of critical importance, but the military was given the mission of making it possible for others to accomplish.

Interestingly, this did not lead to a purely defensive strategy, where South Africa could portray itself as a victim of Cold War aggression.  As de Vries, Burger, and Steenkamp note:

From 1978 until the war ended in 1989, the SADF took the fight to the enemy. They did not hesitate to execute pre-emptive strikes into southern Angola or launch high density counter-insurgency operations in enemy territory. Naturally, these operations received great international attention, which did not do foreign relations any good at all. p. 199, emphasis added

However this was a price South Africa was willing to pay because the effect on morale (friendly as well as enemy) and the sheer costs of the attrition caused by these raids led the Cubans to withdraw and persuaded the other parties to enter negotiations that ended the conflict. In any case, South Africa was pretty much a pariah nation by this time, anyway (Nelson Mandela was not released from prison until the following year).