I’m pleased and honored to announce that Certain to Win is now available in Japanese. The publisher selected a title that they thought would appeal to the Japanese audience; the original title is included on the copyright page. 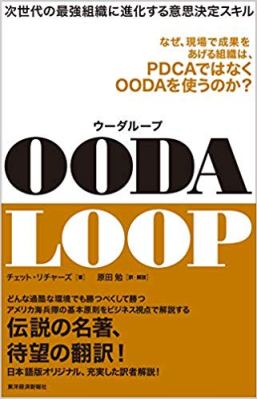 Boyd discovered the Japanese classics of strategy after he completed Patterns of Conflict and its companions, Strategic Game and Organic Design. He began, as did many of us, with various translations of Miyamoto Musashi’s Book of Five Rings.  The book that had the most influence on him, however, was undoubtedly Thomas Cleary’s The Japanese Art of War (1992), which showed that Musashi exemplified a deep tradition of Japanese thinking on strategy. At about that same time, I started sending him descriptions of the Toyota Production System by Taiichi Ohno and the researchers at the International Motor Vehicle Project.

In all of this, he found familiar ideas, including:

This is not a coincidence because, like the Japanese philosophy, much of Boyd’s earlier work traces back to Sun Tzu and the Daoist traditions of China.

You won’t find mentions of Musashi or the other Japanese authors in any of Boyd’s works. However, if you compare the only OODA “loop” he actually included in any of his presentations with the circular version he had been using until the early 1990s, it’s pretty clear that something dramatic happened to his thinking. A lot of the credit for this can go to his deep study of Japanese sources.

[All of Boyd’s presentations are available from the Articles page at the tab above.]

I would like to thank the publisher, Toyo Keizai, the translator, Professor Tsutomu Harada, and my agents in Japan at The English Agency.  You might also enjoy Toyo Keizai’s online magazine (reads pretty well using Chrome’s translate feature).

You can order the book from Amazon Japan (click on the language selector on the menu bar at the top of the page for more information in English).

Here is an extract from the introduction to the Japanese Edition:

Sun Tzu claimed that generals who understood his strategy were “certain to win.” But many common tools of war, such as deception, shock, and destruction simply do not apply to business. Is it possible to become certain to win in business? I believe that it is and that the fundamental concepts formulated by Sun Tzu are still valid. However, as the American strategist John R. Boyd (1927 – 1997) used to remind his audiences, a lot has happened in the last 2,500 years.

A modern philosophy of conflict

The purpose of this book is to introduce John Boyd’s philosophy of conflict to the Japanese audience. In the West, Boyd is generally regarded as a warrior. His works update Sun Tzu with concepts from the history of warfare from Genghis Khan to the German Blitzkrieg, combined with discoveries from abstract mathematics and modern physics. The result is sometimes known as the doctrine of “maneuver warfare.” After the end of the Cold War, however, he turned his attention to other forms of conflict, including business, and realized that his war strategies were actually based on more general principles that will be familiar to many in Japan. From the samurai period, for example, he read about Miyamoto Musashi, Takuan Soho, and Yagyu Munenori. Later, he studied Taiichi Ohno and Shigeo Shingo on the Toyota Production System.

He found the same underlying ideas that had inspired his earlier works: An emphasis on creativity and initiative by all members of the organization, which is embodied in the kaizen principle in manufacturing, focus and harmonization of these efforts, the hard practice needed to make actions intuitive with no hesitation or interruption, appreciating both the expected and the unexpected, and most important of all, the need to preserve an accurate internal model of reality, no matter how unpleasant or frightening the implications of that model might be. He wove all of these into his last two works, which look at the nature of competition in general, not just at war.

Because life involves conflict, it is important to resolve these conflicts in ways that are favorable to us but also do not, in Boyd’s words, “sow the seeds of future, unfavorable conflict.” As the Toyota Motor Corporation insists, we must take charge of our own destinies, which means that we manage our businesses to remain viable enterprises over many years. For this purpose, Boyd’s fundamental insight of encouraging the creativity and initiative of all members of the organization and harmonizing them to accomplish the purposes of the organization are as applicable to business as to any other human endeavor.

Unfortunately, Boyd did not live to see the completion of this book. He did, however, read several early drafts, and we spent many hours discussing these ideas. I hope this translation makes his works accessible to readers in Japan and that they will continue to develop his concepts, many of which are theirs, as well.

Given where he was going with all this, it’s fun to speculate what Boyd would have come up with were he alive today (he’d have been 92 on January 23rd).

2 thoughts on “Japanese Edition of Certain to Win”