Chuck Spinney has made a tweak to Evolutionary Epistemology, his look into Boyd’s process of destruction and creation.  If you’ve ever been put off by the density of Boyd’s paper, start here (download from our Articles page).

In particular, he added one more slide, Boyd’s “Revelation.” He explained: “As you know the Revelation was produced by Boyd at the completion of all his efforts … it is a great slide to end my brief.” 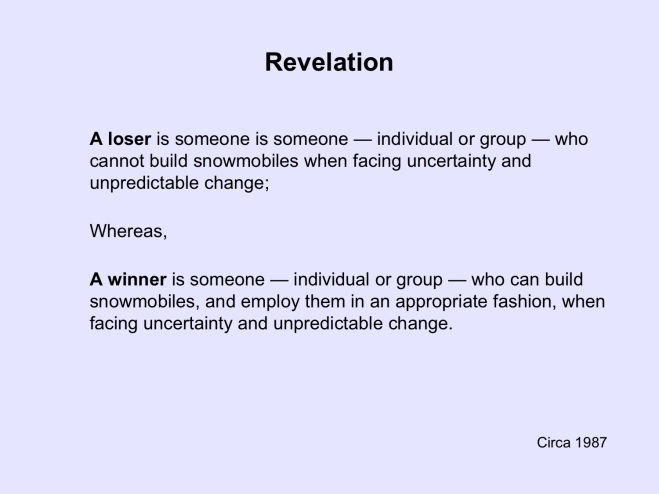 I agree. But on first reading, it may seem obvious, even trite. There’s more here, though, than meets the eye. You might try treating it like a Zen koan: What does he mean by “loser”? Somebody who loses all the time? Fifty-one percent? Only the decisive battle? Someone who quits? Does this apply to other forms of conflict, like business, where not every product or service is going to be successful? Would it be more accurate to describe a winner as someone — individual or group — who can build better snowmobiles than the competition? Seems reasonable, but it’s not what Boyd wrote. That, of course doesn’t mean that it’s wrong.

And what about that term “appropriate?” According to the “Revelation,” losers can’t build snowmobiles at all, but winners not only have to build them but also employ them “appropriately.” Again, it seems obvious that to succeed, you have to use the thing you built, and why would you employ it inappropriately? Is Boyd driving at anything profound, or even useful, here?

Every word in the “Revelation” was pondered and debated, including many of the topics raised above, in those legendary phone calls Coram describes. What you see is what came out.

While we’re on the subject of winners and losers, you might compare the “Revelation” to The Essence of Winning and Losing (1996).