Fit for Purpose: How modern businesses find, satisfy, and keep customers
David J Anderson and Alexei Zheglov
To be released by Amazon on November 29, 2017 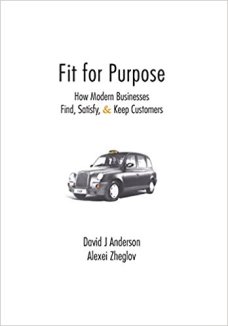 When I first read the title “Fit for Purpose,” it seemed a little passive. Something like “meets specs,” which is necessary but suggests that somebody else is driving the market. I don’t know Alexei personally, but David is the founder and chairman of Lean Kanban, Inc., which provides training and consulting in “Lean Kanban” and related management tools based on a philosophy similar to Boyd’s. I’ve spoken at several of their events and keynoted Lean Kanban Central Europe 2015. (The charts and a related paper are available from the Articles page, link above).

But when I got deeper into Anderson & Zheglov’s book, it became clear that although their methods would certainly help developers meet specs, “purpose” could be something much more active and powerful.

Developers, whether of software, cars, or airplanes, occasionally forget that the real purpose of their efforts is to produce something that will delight their customers so much that they come back for more, and tell their friends, family, and colleagues. So David and Alexei subtitled their book not “Better ways to develop widgets,” or some such, but “How modern businesses find, satisfy, and keep customers.” As they insist, the only “purpose” that counts is the customer’s:

Before you can evaluate whether your products or services are fit-for-purpose, you need to be able to identify your customer’s purpose.

And their next paragraph reminds us that the members of your organization who come into direct contact with customers are your best sources for clues and data.

So the key is harnessing this information, “rolling it up” as John Boyd would have said, so that whatever it is you’re developing delights customers, whether they knew they needed it or not. (As an aside, in one of the most successful companies I worked for, the receptionists — who also answered the phones — worked directly for the CEO.) You need a culture and systems to make sure that information about customers, and perhaps even more important, about why people left without buying, flows to people who can use it, no matter how that information originally entered the company.

What you need, and David & Alexei’s book is unusual in this regard among books for techies, is something called “mission command.” Check out the chapter on this subject in their book (disclosure — I’m mentioned there). Although I’m not a developer, I’ve watched their methods in action and I do know that they provide the roll-up you need. This bottoms-up flow is absolutely the power, the energy that drives competitive companies forward. When used within a climate like Boyd’s EBFAS,** and Lean Kanban and its close relative “Enterprise Services Planning” fall into this category, all the grey matter in the company works toward creating customer delight, even fanaticism.

We talk a lot about reducing waste, but as the founders of Lean insisted, the absolute worst form of waste is to make something that doesn’t sell. One hundred percent waste, no matter how agile your development process is and how lean your production. Fit for Purpose can help you avoid this fate.

David, Alexei, and I would seem to have have a few disagreements. I find, for example, their faith in metrics touching. They write:

Cynics also jump at metrics with glib assertions such as “all metrics can be gamed.” This is patently untrue. You can’t game your finish time for the Boston Marathon for example.

Well, if you’re in a business where the finishing time of the Boston Marathon tells you something useful, so be it. However, for the rest of us, the idea is that once a measure becomes a metric, that is something that people are rewarded or punished on, then the only thing that keeps people from gaming it is the limits of their ingenuity. Test this at your peril.

It turns out, though, that we’re talking about much the same thing. David and Alexei, for example, offer a solution, pairing measures that “provide feedback” on each other. It’s a good idea, Google “SWOLF” for another example, and it certainly does make it harder to game. But it also implies a deep understanding of the dynamics your system. In particular, you have to know which single-dimensional measures to pair and how they interact. Quality and throughput time, for example, tend to trade off in top-down command-driven systems, but not so much in any “lean” system. On top of all that, you have to interpret what sets of pairs mean, not just magnitudes of a single metric. As I said, deep understanding.

This reminds me of Boyd’s comment that in maneuver and moral conflict, it isn’t the metric itself that’s important but rather your interpretation. To borrow an example from Martin van Creveld*, in attrition warfare, an increasing enemy body count shows your strategy is working, but in counterinsurgency, it probably suggests you’re alienating an ever larger percentage of the population.

If you have this level of understanding, then you’re probably already eliminating a lot of the incentive for people to game the system. Otherwise, as David and Alexei warn, “So, a simple but final word of caution on metrics, as a summary to close this topic – beware individual metrics, they may drive nasty, at times, unforeseen side-effects. Proceed with caution.” Indeed.

PS — David and Alexei include a couple of delicious “real world” chapters, 11, “Blind Spots,” and 14, “Be Paranoid.” These two alone are worth the price of the book.

*Covered in detail in the paper and presentation from LKCE15. Essentially, mission command and the other cultural attributes necessary to use it.
**The Changing Face of War, pp. 219 – 235.

2 thoughts on “Fit for success”